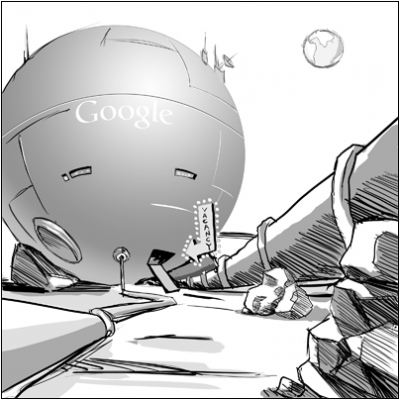 This was Google's April Fools hoax in 2004. They had a a great job offer for engineers to work on the moon. Google Copernicus Center was an April Fools joke.

In 2004 Google had following Job Offer for engineers who were interested to work on the moon:

'Google is interviewing candidates for engineering positions at our lunar hosting and research center, opening late in the spring of 2007. This unique opportunity is available only to highly-qualified individuals who are willing to relocate for an extended period of time, are in top physical condition and are capable of surviving with limited access to such modern conveniences as soy low-fat lattes, The Sopranos and a steady supply of oxygen.

The Google Copernicus Hosting Environment and Experiment in Search Engineering (G.C.H.E.E.S.E.) is a fully integrated research, development and technology facility at which Google will be conducting experiments in entropized information filtering, high-density high-delivery hosting (HiDeHiDeHo) and de-oxygenated cubicle dwelling. This center will provide a unique platform from which Google will leapfrog current terrestrial-based technologies and bring information access to new heights of utility.

In the end nobody was hired! April Fool!

In 2017 Groupon has launched a special product. The world's first edible prosecco flavoured nail polish. Now you can enjoy prosecco every moment of the day!

In Canada, the chain has released the KFC Bucket, a voice-activated delivery system and smart dining assistant. The finger-lickin’ future is here.

H&M seemed to have a new brand ambassador. With the Mark Zuckerberg clothing line you can stay focused on your career.