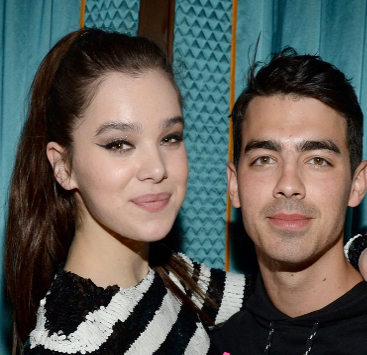 Joe, whose band DNCE is featured in her new song and music video "Rock Bottom," introduced himself to her as "Harry" and imitated an British accent while asking her questions over the phone. His first involved a rather creepy request.

"My first question is, it's kind of weird, but can you send me some of your toenail clippings in the mail?" he asked.

"Is this for real?" she asked incredulously.

He also asked, "What was it like working with DNCE and that Joe Jonas?"

"It was really great," Steinfeld said. "I had a wonderful time collaborating with them. I love Joe and the band. Yeah."

Seemingly sensing something is up, she continued to say, "I think they took a lot away from it, actually. You know, Joe sings the whole second verse, which means I'm not singing it, so that kinda sucks, but whatever."

Steinfeld also said that when the "Jonas boys," aka Joe and his fellow former Jonas Brothers members, walk into a room, "it's like no one else exists."

"It's pretty terrible," she said.

Last year on April Fool's Day, Joe posted on his Twitter page an ultrasound photo of a baby, which shows up on the first page of a Google Images search, saying, "So happy to announce Hailee Steinfeld and I are expecting our first."

"We kind of messed with people [on] April Fools, but forgot to tell people it was a joke," he added. "Oops."

In 2017 Groupon has launched a special product. The world's first edible prosecco flavoured nail polish. Now you can enjoy prosecco every moment of the day!

Google Play is a system on your mobile device to download and play small games to entertain yourself. Google made the joke that its not available for pets!